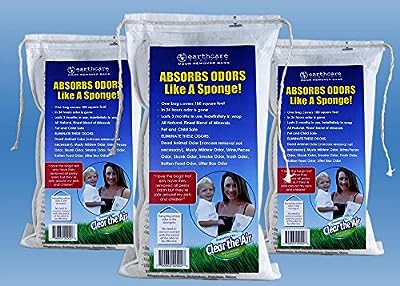 Please choose from the options above to see price and availability.

Product Information (more info)
0 0
CERTAIN CONTENT THAT APPEARS ON THIS SITE COMES FROM AMAZON SERVICES LLC. THIS CONTENT IS PROVIDED 'AS IS' AND IS SUBJECT TO CHANGE OR REMOVAL AT ANY TIME.

Use the Earth Care Odor Remover Bag to remove dead rodent odors, urine and feces odors, skunk odors, musty mildew odors, trash room odors, and cigarette smoke. Earth Care Bags do not have to come into contact with the odor causing agent. Simply hang the bag near the source of odor and in 24 hours the odor will be gone. Earth Care acts like a magnet by attracting and neutralizing smells. It is made from an all natural minerals, is non toxic and biodegradable and safe for Planet Earth. It is also safe around children and pets. Earth Care absorbs odors rather than masking them with a fragrance. Disposal is easy and environmentally-friendly: simply add it to soil. One bag covers up to 100 square feet, last 3-4 months in use or indefinitely in plastic wrap. Make sure to measure your area and purchase the correct number of bags for maximum effectiveness. The bag comes with a string for hanging. Each bag measures 6"x11" Weight 19oz.

Removes (not masks) odors of pets, urine, cigarette smoke, dead rodents, litter box odors. Great for realtors during open houses; apartment building managers, RV'ers and boaters, anyone living in humid climate, pet owners, etc. Keep one in your car to keep it smelling fresher. Great for dorm rooms, locker rooms and lockers, fitness and change rooms, hockey bags - anywhere odor-causing bacteria is present. Clears air of musty and moldy smells - great for use in basements and storage rooms. Eliminates garbage and trash odors - use in dumpster rooms and closets; storage rooms, vacant properties etc. All natural, non-toxic, safe for pets and children, easily and naturally disposable. Made in the U.S.A. No need for the contents to come in contact with the source of smell - just place the bag in the room close to the source and the odors will be gone in 24 hours. One bag covers 50-100 square feet and lasts 3-4 months.